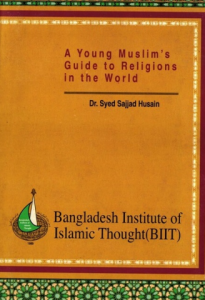 A YOUNG MUSLlM'S GUIDE TO RELIGIONS IN THE WORLD is the tirst in a projected series of books which the Institute of Islamic Thought in Bangladesh intends to publish as educational aids to the young who have to rely on publications by non-Muslims for knowledge about culture and civilisation. These publications discuss matters from an angle which is often anti-Islamic and sometimes distort history, by suppressing facts about Islamic society in order to justify their assertions. A Muslim student who reads them unthinkingly is apt to develop attitudes towards his own culture which at best can be described as apologetic. The programme that we have embarked upon in concert with the International Institute of Islamic Thought in the USA, is designed to provide an alternative. What Dr Syed SaüadHusain has attempted in the present book is to analyse different religious cultures in an Islamic perspective, focusing on the differences and affinities, if any, between Islam and other religions. We hope the book will prove a useful primer to those interested in comparative religion and help correct many errors. The Bangladesh Institute of Islamic Thought is a small body of people dedicated to Islam whose principal mission is to see to it that the Musli ms might understand their own religion and culture and not be influenced by alien attacks and non-Muslims be enabled to acquaint themselves with the Muslim point of view. They believe that the preservation of the Islamic heritage as weil as intercommunal peace and harmony depends upon the rational understanding of the truth. The Bangladesh Institute takes this opportunity to acknowledge its gratitude to its counterpart in the USA for the encouragement it has received from il. We are also grateful to Dr Syed Saüad Husain for agreeing to cooperate with us in our programme. It gives us immense pleasur that we are presenting the second edition of the book to the readers. M. Zohurul Islam FCA Seeretary General Dhaka2003 Bangladesh Instltute of Islamle Thought vii